Last week we settled on the old house and Raelene deposited a Commonwealth Bank Bank Cheque into our Commonwealth Bank account.  That was Tuesday.  On Friday I sent an email asking why a Bank Cheque which is supposed to be as good as cash from what I remember, still hadn't cleared.    Today I get this back from the Bank - "Dear Laurence,

My name is xxxx your Online Specialist, I am pleased to assist you today with your recent email enquiry in regards to clearance fo bank cheque.

First of all I would like to sincerely apologise for the delay in my response as our team are currently receiving a high number of online enquiries.

Laurence, it is a Business Rule for cheques to get cleared in 3 business days and not calendar days.

What I can suggest for further clarifications, you can contact us on 13 2221, 24 hours a day, 7 days a week or visit any of the nearest branches.
It has been a pleasure assisting you Laurence, I hope this information has assisted with your enquiry today and I wish you all the best for the rest of your week.
Sincerely, xxxx"
So I of course had to reply  "I understand that but that was not the question. Your own website states - "Cheque deposits attract a number of clearance days as the cheque itself is a paper based payment instrument. This requires the physical cheque to be forwarded to the drawing institution to determine the payment decision after inspecting the cheque for authorised signatures". However, in this case you were the drawing institution. Why does it take 3 days to forward a cheque to yourself to gain approval?" CBA if you monitor this sort of thing maybe you can reply.
Posted by Loz at 9:49 PM 2 comments: Links to this post

I miss you Mum

Dear Mum
Hard to believe that it was a year ago today that I last saw you.  A lot has happened in that time.  I left my job, went to another company that ended up in liquidation and found a new job as a contractor but am likely to be put onto a long term contract in the next few weeks.

The new house has been built and Raels and I have been here now for 6 weeks.   Funny but it is home already unlike the last couple of places I've lived.  Maybe that's because we've built this from scratch.  I wish I could have shown you what it's like.

I imagine you riding off on that horse you told us about in the last few days.  I don't know where that came from because I don't ever remember you talking much about wanting to ride horses despite loving to bet on them.   Maybe that was the little girl speaking. 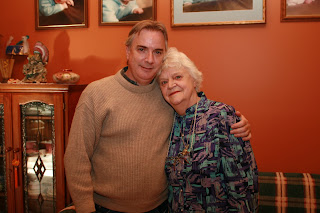 I think I told you that Dad visited me one night not long after I'd moved into the flat on Burwood Highway and I sometimes wonder if you'll ever do the same.  But then again maybe you know that I'm happy now and that you don't need to set me straight.

Karen,  Deb and I celebrated Christmas together last year like we always used to, but I think that may well have been the last time we'll do that.  You were the glue that held that together and I'm guessing that we'll probably not find the time to do it too often in the future given the kids have grown and will be splitting time between the new families they'll make over the next few years.    Karen is off to Queensland this year to spend Christmas with Jacob and Jenna, Luke may be back In Adelaide and your other grandkids are also starting to spread their wings.  Spending time with old Aunties and Uncles doesn't seem as important as when they were little.    But don't worry about that, it's just part of growing older.

Funny but I was really conscious of you and Dad being gone last Christmas, my first as an orphan, and my first Easter and Mother's Day this year followed by my first birthday.  Weird being a 54 year old orphan.  Sometimes I get a bit taken aback looking at the old bloke in the mirror because it's not how I see myself.

I know what you meant now when you said that there wasn't a day go by when you didn't think of Nana and Grandad because it's the same with me.   I miss you both very much and wish I'd told you that more often.

You gave me a great start to life Mum and I will be forever grateful for that.  Sure there were moments, but we had a great upbringing.  I always knew you were proud of me even if I didn't know why.

Thanks Mum.  I love you very much and miss you terribly

For all those Fathers out there may I wish you well today.  Not a day goes by when I don't miss my Dad and this year a week before the anniversary of Mum's passing it is a little more poignant.  Son number 2 and girlfriend and both daughters came over for a BBQ lunch and we spent the afternoon watching the Return of the King in the home theatre.

And the new house is now home - we've spent much of the past couple of weekends cleaning up the old one and have in fact now walked out the door up there for the last time.  Raels has posted some updated photos over at Destination 3977.

My contract at work finishes at the end of next month but it looks like I'll be offered a longer term one to stay on and finish off what I've started.   The works interesting, I'm still learning, and the people are good.  Doesn't need to be anything else really does there.

So just a short update this time - i've got a few other posts on the go but haven't managed to finish them yet.  I reckon things might slow down a bit over the next few weeks and I'll get a bit more time to write.
Posted by Loz at 7:47 PM No comments: Links to this post