It was Guy Fawkes night a few days back and I remembered that I had previously posted a story that I'm going to resurrect here with a few additions given I am going through that reminiscence stage again. 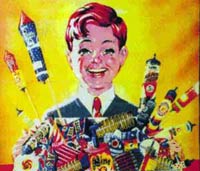 Talk to kids these days of Catherine Wheels, Tom Thumbs and Penny Bungers and they may well think they were three of your school friends but a long time ago they were synonymous with Guy Fawkes night. A celebration of the plot to blow up the British Parliament something I didn't know at the time and probably something that didn't really matter either because for us it was just an excuse to blow up letter boxes, stick sky rockets in milk or beer bottles and stand in front of a bonfire for hours with all the other families from the neighbourhood.
In the old orchard estate where I lived there were still plenty of vacant lots in those days and in the weeks leading up to Guy Fawkes night all the kids and most of the dads from the neighbourhood would spend every spare minute dragging whatever the could find into the middle of the lot and building a bonfire that seemed to stretch for yards into the sky. It didn't matter what you threw on there either as long as it could burn - there'd be old furniture, mattresses and plenty of old car tyres that burnt with thick black acrid smoke. The blacker the better.

For weeks in the lead up to the night we'd be dragging rubbish from everywhere usually with the Dad's leading the way. In the end the pile would literally reach yards into the air and Dad, as he did, would pour a can of petrol over it on the night to make sure that it burnt properly.

The nights would start with a gathering on the corner with the fireworks our fathers had brought home and we'd watch in amazement as the catherine wheels spun and the rockets burst high overhead and when ours were finished it seemed to be a signal for more to begin rising from other parts of the neighbourhood and the show would go on for what seemed like hours.

There were no huge symphonies of fireworks. Each rocket and penny bunger were to be savoured in their own right. The odd fizzer didn't matter, the ones that leapt spluttering to the moon more than made up for those.

We'd all be dressed in our pajama's and dressing gowns and be allowed across the road to watch the lighting of the bonfire where the sparklers would be brought out and we spend what seemed like hours writing our names with the light. We never saw the bonfire go out because at some stage the Mum's would gather their kids together and usher them off to bed. I'm not sure, but if I know my Dad, he would then break out the beer and I'm sure the Dad's would stay out there watching the fire burn down. It would have been for safety reasons of course.

Do you remember the sound of penny bungers being set off in letter boxes or down drains and for days after the stacato sounds of a strip of tom thumbs being let off in the school toilets.

Now kids have all their fingers but a lot less fun so I count myself lucky to have lived in the days before fun was banned.
Posted by Loz at 8:49 PM

My mate is in mourning for the demise of Guy Fawkes fireworks to this day! A while back though, I found some exploding rocks in a novelty shop that brought back all his old memories - including that unmistakable cordite smell!! Thanx for visiting my blog - hope you come back again real soon!!

Thank you Red Nomad and I will be back

I remember it all, including when we flattened the car battery by using the cigarette lighter to light cracker wicks. The lighter was so hot it was nearly glowing red.

Glad I experienced it but I am glad it was stopped. Bad things happened.

guy Fawkes is not something we celebrate in Guatemala, but the bonfire tradition is very similar to that one of "Quema del Diablo" (burn of the devil) here in Guatemala on Dec. 7th. Bonfires (smaller each year) are lit, which in the past included mattresses, wood, old clothes and anything you could throw in. These days is a very small fire with a devil piñata on top. It is believed that after that day - when whatever evil in your home is burnt - your house is ready to be Christmas decorated, and ready to receive Christ.
Like you, I consider myself lucky for having been able to be part of the tradition in all its glory, wishing today's kids could experience it as I did.
Thanks for sharing!
have a great day.

Aww...Isnt that ironic ? Moreover children these days dont seem to be into things like these. Give them a video game and they're happy.

Claus - sounds like a very similar celebration and I'm sure if we go back far enough we'll be able to find a common link to some ancient pagan festival.

Hi Ash - I think that is maybe because they haven't been exposed to oter things. There's a TV program running on SBS TV here at the moment called James May - Toy Stories. James is one of the presenters of the UK series Top Gear and in this program he re-visits toys that gave him joy as a kid and introduces kids to them today with some delightful twists. They still love them but have just never been exposed to them before - plasticine, airfix models, scalextric cars, lego and meccano to name a few.

I remember Guy Fawkes day. I always loved the pretty fireworks like roman candles, catherine wheels and sky rockets. My brother only bought penny bungers for a few years, then switched to threepenny bungers which were huge and did quite a lot of damage if set off inside a container. I remember one year shards of milk bottles flew for yards down the street. He'd set up about a dozen of them each with a bunger inside and went from one to the other lighting the wicks then running like crazy.

Hi River - I guess we did do some stupid things. Maybe Andrew is right