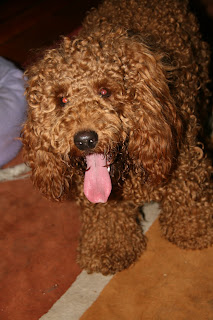 My dog Ramsey is a little over a year old and a true ratbag.  Daughter number 2 who is with me at least every second weekend has been harping for months now about the need to get him desexed.  Now he doesn't have a predilection to hump legs of tables or persons, he is not overly agressive and whilst I understand that it is a recommended course of action I'm a bloke.  And blokes struggle with the thought of having their balls chopped off.

Today daughter number two decided to tr and appeal to my medical knowledge by telling me that if his was deknackered he would not get testicular cancer, to which I replied "Why don't we chop off his head then.  That way he won't get a brain tumour."

Now any bloke who has seen someone else hit in the nuts at any time knows that it is the one thing that makes all of us squirm.  It is deeply programmed into mankind and most likely dates back to the time when our first shrew like ancestor fell onto a tree branch and straddled it painfully.  It's something that we tend to want to avoid at all costs.  I'm not saying he won't be done at some stage in the future but right now with a 16 year old telling me that his nuts are gross and he'd be better off without them, I am manfully resisting the call.
Posted by Loz at 10:59 PM 10 comments: Links to this post

A few days ago I briefly set up a burner feed of this blog back to my facebook page, but only left it up for around 15 minutes.  I chickened out in other words.   Blogging has been a refuge for me for a long time.  A place where I can reveal parts of me that I wouldn't dream of talking about in the real world.  Sure there have been people who know me reading it on occasions with the associated grief that brought at the time, but for the most part this communication has been with people who began as strangers but who I have come to regard as more than that as we have interacted.

Facebook though is full of people who know me personally - there are friends and family, current and ex work colleagues, business associates, old school buddies, a conglomerate of every type of person I have met throughout my life, and after I posted the feed I asked myself if I was ready for each and every one of them to have access to what is really a mirror into my soul.  The answer was not really.

I am not ashamed of anything I have written because I know that blog posts are snapshots of an instant in time.  Truth for the moment and in the context of the moment.   But there are also people who don't understand that and some who will take things out of context and use them against me.  That sounds a bit paranoid but I have had it happen before so I don't have a lot of faith that it couldn't happen again.

So I'm asking you as blogging buddies - do you publish your feed on Facebook?   Am I being a chicken or are my concerns legitimate?
Posted by Loz at 4:21 PM 7 comments: Links to this post

I don't get sick

At least that's true most of the time and it usually means that when I do I tend to fall in a heap.  I got through the entire first 13 months at my current job without taking any sick leave but on Monday night last week started to get a bit of a dry cough.   That night I went down hill and although I got up to go to work I ended up going back to bed.  Same thing Wednesday and come Thursday morning I decided I'd go to the doctors.

I was in the surgery for around a minute I reckon.  He held the stethscope to my chest in three places and asked me to cough, he stuck a depressor down my throat and then said.

"You are not well.  I feel you have a virus and you should go home and spend the next three days in bed.  If you are no better on Sunday, come back and ask for Dr Alex."

Come Sunday I was feeling better and Monday I went back to work only to find that I coughed and spluttered all day and lost my voice.  In the end the boss told me not to come in on Tuesday, so I didn't.   So what is the illness - I don't know, I have had the symptoms of swine flu, but the doctor never told me that was what it was.  All I know is that I was not myself.  Some might say it was man flu, but I can tell you I was genuinely incapable of working for the best part of a week.
Posted by Loz at 3:32 PM No comments: Links to this post

Now here's a nightmare.  A 58 year old man was taken to hospital in Cairns early this week after sitting on a public toilet seat only to find that it had been smeared with superglue.   Now I'm hoping that it was one of those horsehoe type seats because if his willy had somehow brushed the seat the outcome may have been even worse.
Posted by Loz at 3:24 PM No comments: Links to this post

Email ThisBlogThis!Share to TwitterShare to FacebookShare to Pinterest
Labels: humour 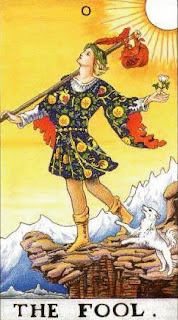 One day I hope I can be a bit more open about the project I am currently employed on. For the moment though I can't mention it because if I do this blog will pop up on the google alerts notices of a lot of people and I'm not sure I'm ready for that. I have no idea if anyone reads it anymore, certainly with the posts few and far between there is no reason for anyone to turn up and see what's been happening. But maybe I do owe some of you who have been loyal readers over the past few years just a little insight into why I haven't been writing.

When I got this new position in June last year I had absolutely no idea what I was walking into. And I wallowed. I wasn't sure I liked it but had no alternatives that gave me an income sufficient to pay the mortgage, I certainly lacked job knowledge and whilst I knew that I can be a bit of a sponge, the 50+ year old brain isn't quite as absorbent as it once was and I found that a lot of what I was trying to learn seemed to go in one ear and out the other. That combined with the obvious competency and intellectual capacity of my new colleagues left me doubting my own ability.

That too was nothing new. I'd spent the previous few years with major self image and self respect issues, hidden to most people I think. The first was my own fault, the second foisted upon me because many people had judged my marriage breakup and the subsequent upheavals and come to the decision that I was the sole person responsible for everything that had gone wrong. And I didn't discourage that. It seemed easier to take the blame because that tended to vindicate the self loathing and ultimately meant that other peoples judgement of me vindicated the way I felt about myself.

Then of course I was sacked from a job that I loved and that I was good at, so again it's very easy to start thinking the worst about yourself. Combine that with the fact that I got my new job as a result of who I knew, not what I knew, and that first few months in the new role left me wondering what the hell I was doing. I didn't want to let down the person who recommended me for the job, and yet I felt absolutely useless.

But slowly I got a handle on things. I coordinated and lead security and privacy audits, I was the key contact for the recertification of our Quality Management System to ISO9001, I began to make myself an expert in Privacy law, I developed and maintained relationships with our major client and other stakeholders and I think began to earn the respect of my peers. I have done things in the past year that I never expected to do. I make no pretense about the fact that I still have a lot to learn, but the greatest lesson I brought with me into this role from my previous working lives is that it is not shameful to admit gaps in knowledge and experience. In fact it is far better to be honest and tell people that you don't know something than it is to give bad advice simply because you don't wish to appear foolish.

Maybe as you get older that ability to embrace the fool with honesty rather than put on the mask and deny it's existence is a gift that comes more easily to us.

Upshot of all that is that I have now finished my first 12 month contract and been made a permanent member of staff. I received a pay rise which was more than twice what I got in the entire six years at my last job, and more importantly it has come with more responsibility and with the opportunity to become involved in other aspects of the business as well.

But you know what, the most important thing is that I am now a contributor and that I am enjoying what I do again.
Posted by Loz at 2:01 PM 2 comments: Links to this post

Back in February during our disastrous bushfires the world was touched by the story of Sam the Koala and a volunteer firefighter by the name of David Tree.

After surviving her burns in a wildlife shelter for the past few months Sam was operated on today for the condition called  urogenital chlamydiosis, a life-threatening disease that affects 50 per cent of the koala population.   Unfortunately she died on the operating table.

For those who didn't hear it at the time I heard David Tree interviewed on the Neil Mitchell program on radio station 3AW here in Melbourne not long after the incident happened, and I was hoping they would post it on their website.   For those who are interested in hearing the story you can listen to the audio here.

This was a story that touched all our hearts and it is sad that despite all she went through she was not able to be returned to the wild.
Posted by Loz at 4:27 PM 3 comments: Links to this post